Dale Ann Bradley to the Kentucky Music HOF, Posted on May 14, 2018 By John Lawless, BLUEGRASS TODAY 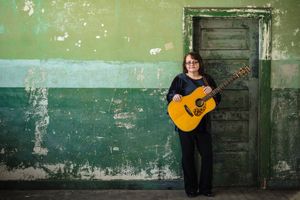 Bluegrass songstress Dale Ann Bradley was honored this past weekend as a 2018 inductee into the Kentucky Music Hall Of Fame.

The ceremony was held at the Renfro Valley Park, where Bradley had performed many times in the early days of her career. Inductions have been held every other year since the Hall Of Fame was instituted in 2002.

She joins a long list of artists from the Bluegrass State so recognized, including greats like Bill Monroe, J.D. Crowe, The Osborne Brothers, Ricky Skaggs, Sam Bush, Keith Whitley, The Goins Brothers, and Larry Cordle, just to mention those in the bluegrass realm.

As a native and loyal Kentuckian, Dale Ann says that she is humbled and blessed to be included.

“Being inducted into the Kentucky Music Hall Of Fame is truly a once in a lifetime experience. I am so blessed to be among the 2018 inductees. The works of so many Kentucky musicans, writers, and singers are carefully preserved in this hall, and the future for our current songcatchers and modern minstrels looks very bright to me. The Kentucky Music Hall Of Fame is a venue that is a vital tool that will help ensure that our songs will continue on.”

Here is a video that compiles a number of photos from the induction, along with parts of Bradley’s live performance during the ceremony.

Thanks to Melanie Wilson with Wilson Pickins Productions, who created the video and shared photos.

Many congratulations to Dale Ann Bradley, who so thoroughly deserves this honor, and many others!